Like Fighter Jets, An ERP Project Can’t Be All Things to Everyone

Like Fighter Jets, An ERP Project Can’t Be All Things to Everyone 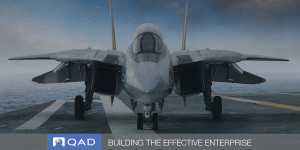 An ERP Project Can’t Be All Things to Everyone

In 2001 the United States Military began developing a new plane, the F-35. The aircraft was envisioned as a replacement for four different planes: the F-15, F-16, F-18 and A-10, and would be used by the Navy, Air Force and Marines. Essentially this plane would be all things to all people.

Fighter Jets and Your ERP Project

What happened? It turns out that there were issues with virtually every part of the machine — both hardware and software. Everything from software forcing pilots to reboot in midair to cracked airframes plaguing the project. I argue that the underlying issue was that this plane was supposed to be all things to everyone. This one plane is supposed to replace four others for three very different branches of the military — each with unique needs and requirements.

So what lessons can we learn from this project? Here’s my take away: your project shouldn’t be all things to everyone, but it can be the right things to the right people. Your ERP can’t include everyone’s requirements, but it can meet a majority of key stakeholders requirements. I believe that a philosophy of a big bang, “ERP for everyone project” is one of the major reasons why 75 percent of ERP projects take longer to implement than planned, 60 percent receive less than 50 percent of their expected benefits and 55 percent come in over budget.

Read more of this article here.